Mechanisms of the regulation of apoptosis 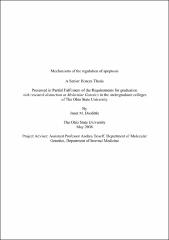 Apoptosis, or programmed cell death, is an evolutionarily conserved developmental program that determines cell fate and acts as a defence mechanism, eliminating pathogen-infected cells and cells that have accumulated undesirable mutations. Misregulation of apoptosis has been implicated in a number of diseases, making knowledge of the mechanisms that dictate its execution of great importance to human health. Cell death is accomplished by a family of proteases known as caspases, and has recently been shown to be influenced by protein kinase Cdelta (PKCdelta) through its ability to phosphorylate caspase-3. In order to study the mechanisms of apoptosis, a multidisciplinary approach was employed. First, a simplified mathematical model was created to describe the molecular interactions of PKCdelta with caspase-3 and expanded to study the mechanisms of the flavonoid apigenin in inducing apoptosis. The model predicts a threshold condition for the activation of caspase-3 and also corroborates biological experiments showing caspase-3 activation prior to caspase-9. In addition, our mathematical model predicted that PKCdelta reaches a threshold apoptotic level in apigenin-induced apoptosis. These findings were experimentally validated using a biological system. To further investigate the means by which apigenin induces apoptosis, we used a microarray of leukemia cells treated with apigenin to identify genes that may be transcriptionally regulated by apigenin. We also expanded the investigation into caspase-3 phosphorylation by examining the structure of six sites mapped by mass spectrometry. The evolutionary conservation and accessibility of each site was considered. Single and multiple site-directed mutagenesis was performed to create phosphomimicking mutations at the sites in question. The enzyme activity of caspase-3 phospho mutants was determined using purified proteins. Thus, we have investigated means of regulating caspase-3 activity, using PKCdelta and apigenin as instruments of cell death. We developed a model of the PKCdelta-caspase-3 relationship and explored the structural constraints involved. The more that is known about the mechanisms by which apoptosis functions and malfunctions, the better we will be able to exploit this knowledge to develop new treatments for the array of human diseases caused by deregulated apoptosis.