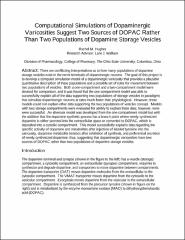 There are conflicting interpretations as to how many populations of dopamine storage vesicles exist in the nerve terminals of dopaminergic neurons. The goal of this project is to develop a computer simulation model of a dopaminergic varicosity that provides a plausible quantitative description of these populations and a possible set of rules for movement between two populations of vesicles. Both a one-compartment and a two-compartment model were devised for comparison, and it was found that the one-compartment model was able to successfully explain all of the data supporting two populations of storage vesicles in paradigms that stimulate dopaminergic neurons at rates much faster than physiological. However, these models could not explain other data supporting the two populations of vesicles concept. Models with two storage compartments were evaluated for ability to explain these data; however, none were successful. An alternate model was developed from the one-compartment model but with the addition that the dopamine synthetic process has a branch point where newly synthesized dopamine is either secreted into the extracellular space or converted to DOPAC, which is deposited into a cystolic compartment. This model successfully explains data regarding the specific activity of dopamine and metabolites after injection of labeled tyrosine into the varicosity, dopamine metabolite kinetics after inhibition of synthesis, and preferential secretion of newly synthesized dopamine, thus, suggesting that dopaminergic varicosities have two sources of DOPAC rather than two populations of dopamine storage vesicles.