Stereotypes and the Bottom Line: Learning Lessons from Gender Based Firing Discrimination Cases 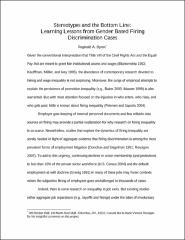