Antoine Jean-Gros's "Hercules and Diomedes": a return to the Baroque 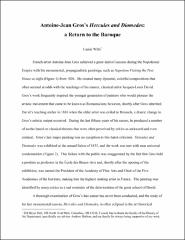 During the Napoleonic Empire, the French artist Antoine-Jean Gros received a great deal of acclaim for his monumental, dynamic paintings of modern subjects such as “Napoleon Visiting the Pest House at Jaffa” and “The Battle of Eylau”; however, in the last years of his career, he produced a series of highly criticized mythological canvases. While scholars often point to the ostensibly paralyzing influence of Gros’s former master, Jacques-Louis David, as the impetus behind this radical change in style and subject during his late career, I assert that Gros, far from disavowing his own artistic inclinations, set forth a new model of classicism in 1835 with his widely criticized painting “Hercules and Diomedes”—a model that might renew an interest in the style and subjects of the great masters in a time when monumental, heroic history paintings were rapidly disappearing in France. Gros, as the newly elected President of the French Academy, created his last large-scale painting, “Hercules and Diomedes,” as an attempt to regain control of the French school. In a letter to Louis-Adolphe Thiers, the Minister of the Interior, Gros refers to his “Hercules and Diomedes” as, “mon tableau...que j’ai eu le courage de faire, dans le but d’un rappel aux hautes études, puisque les succès en peinture semblent, en ce moment, être d’autant plus grands qu’ils s’en éloignent davantage.” Gros’s subject, the rarely depicted eighth labor of Hercules, certainly presented the opportunity to display the struggling, heroic male nude that had been an essential element of Davidian Neoclassicism; however, I believe that Gros was looking to the work of the first leader of the French Academy, Charles Le Brun, as an inspiration for his last monumental painting. In 1640, the youthful Le Brun was commissioned by Cardinal Richelieu to paint his “Hercules Vanquishing Diomedes,” and the compositional similarities to Gros’s work are striking. As the First Painter to Louis XIV and the primary artist involved in the decoration of Versailles, Le Brun was a legitimate model of emulation for younger artists and offered an alternative to the static classicism of David. His dramatic and dynamic style would, without a doubt, be more engaging for a younger generation of artists coming of age during the rise of Romanticism. Gros’s depiction of the eighth labor of Hercules placed him in line with not only Charles LeBrun, but also a more recent President of the Academy who had chosen LeBrun’s “Hercules Vanquishing Diomedes” as a precedent for his own painting. Jean-Baptiste Marie Pierre, the President who was so often at odds with the young David during the years just prior to the Revolution, painted his version of the story, “Diomedes, Slain by Hercules,” in 1742 as his reception piece to the Academy. The compositional similarities to Le Brun’s work are undeniable, indicating not only that Le Brun’s work had been an inspiration to a former President of the Academy but also proving that, regardless of David’s opinion of Pierre, Gros sought to establish a recognizable, legitimate classical tradition that could be linked to these two great academic leaders of the past. Unfortunately for Gros, his attempt to lead by example can only be described as a resounding failure, as the Salon audience regarded “Hercules and Diomedes” as a tragic reminder of how far Gros had strayed from his great Napoleonic works; however, this painting was Gros’s last effort as the most prominent classical artist in France to regain control of the French school before his death by suicide later that year. He offered the younger generation of artists an alternative model of classicism which did not carry the stylistic constraints and negative political associations of Davidian Neoclassicism. Looking to Charles Le Brun and his treatment of this very unusual subject allowed Gros to make use of his own talent for dynamic, colorful compositions while presenting a new, reinvigorated kind of classicism based on the style of the famous Baroque master and one-time leader of the French Academy.