Seeing and manipulating spin-spin interactions at the single atomic level 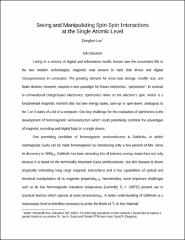 The 2007 Nobel prize in physics went to Albert Fert and Peter Grünberg “for the discovery of Giant Magnetoresistance (GMR)” which is an effect that underlies all of the read sensors in today’s hard disk drives. These initial studies of GMR have opened a new paradigm for future electronics called ‘spintronics’. In contrast to conventional charge-based electronics, spintronics relies on the electron’s spin, which is a fundamental magnetic moment that has two energy states, spin-up or spin-down, analogous to the 1 or 0 states of a bit in a computer. One key challenge for the realization of spintronics is the development of ferromagnetic semiconductors which could potentially combine magnetic recording and digital logic in a single device. One promising candidate is GaMnAs, in which nonmagnetic GaAs can be made ferromagnetic by introducing only a few percent of Mn. The low ferromagnetic transition temperature (currently Tc<-100C) of GaMnAs, prevents use in practical devices which operate at room temperature. A better understanding of GaMnAs at a microscopic level is necessary to probe the limits of Tc in this material. We have built a low temperature (-260C) ultrahigh vacuum scanning tunneling microscope (STM) to study spin-spin interactions in GaMnAs at the atomic level. Our STM can be used to image semiconductor surfaces with atomic resolution, manipulate individual Mn atoms, and spectroscopically probe Mn-Mn interactions. A clean GaAs surface is prepared by cleaving a p-type GaAs crystal inside the ultrahigh vacuum chamber. A low coverage of Mn atoms is then evaporated onto the surface. To more closely mimic a bulk-like environment, single Mn atoms can be substituted for Ga in the first layer of the surface, by applying a voltage pulse with the STM tip. To study Mn-Mn interactions, we make pairs of substituted Mn. Our STM studies on Mn pairs show interesting spin-spin interactions which strongly depend on the Mn separation and relative crystal orientation. For example, coupling between two Mn atoms switches from ferromagnetic (parallel spins) to antiferromagnetic (antiparallel spins) depending on the pair’s orientation. We are also developing a capability for spin-polarized STM to better study long range magnetic ordering between pairs and larger clusters of substituted Mn. By using a magnetic STM tip such as Ni or Cr, spin-polarized STM can selectively detect different spin states of Mn clusters. These studies will contribute to a microscopic understanding of the underlying physics of GaMnAs, and will help in the search for new semiconductor materials which exhibit ferromagnetism above room temperature.