Searching for the Next Al-Qaeda: Why and How Hizb-ut-Tahrir Was Framed 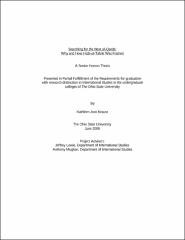 This study examines the correlation made by United States policy institutes, foreign governments, and international media between al-Qaeda and Hizb-ut-Tahrir’s (HT) potential for terrorism in the wake of the events of September 11, 2001. These arguments are compared with the membership structure, ideological base, and establishment of both HT and al-Qaeda. In this analysis, evidence points to the inherent differences between the groups and the high unlikelihood that HT will resort to violence or terrorism in the near future. After establishing these conclusions, potential issues in analysis bias are discussed. Advisors: Jeffrey Lewis, Anthony Mughan