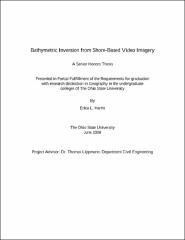 Models that predict nearshore behavior require as input boundary conditions the bottom profile. Traditionally, beach profiles are measured with differential GPS receivers mounted on amphibious vehicles or small boats. Logistical difficulties in obtaining frequent beach profiles over large nearshore areas have limited their acquisition to a few sites or intensive study periods. In this work, the ability of remote imaging techniques to measure the beach profile using land-based video cameras is evaluated. Such techniques have been developed for video systems on airplanes (Dugan et al., 2001 a, 2001 b), from which the methodology used in this project is based. The airborne techniques will be adapted for use with a fixed, highly oblique video camera mounted on a 20 m high tower erected on the dune at the USACE Field Research Facility (FRF) in the Outer Banks, North Carolina. Water depths are determined by estimating linear wave theory dispersion curves from image intensity energy surfaces in wavenumber-frequency space. Approximately 12 minute video time series over successive, overlapping square sections of the nearshore (100 m on a side) are interrogated from 6 m depths to near the shoreline. Results spanning November 2006 to October 2007 (12 individual surveys) are compared with in situ survey measurements obtained with traditional methods on the same day. Water depths estimated from the video inversion methods were generally within 0.75 m of the in situ surveys all the way to 6 m water depths about 500 m from shore. Larger discrepancies occurred in regions influenced by a large pier in the center of the domain. RMS errors as a function of cross-shore and alongshore position were also computed. RMS errors were typically 0.5-0.75 m within 250 m of the shoreline, and often extending offshore to 500 m. Errors as a function of alongshore position were also less than 0.75 m except in the region blocked by the pier.