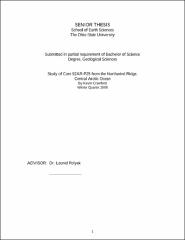 The Arctic Ocean is presently the least understood ocean in the world. The perennial sea ice that covers most of the Arctic has hindered exploration and interpretation of this last remaining portion of the Earth’s surface. The geologic history of this ocean is not fully understood and needs to be studied in greater detail. The stratigraphic record in the Arctic is a topic of much debate, specifically when discussing ages and sedimentation rates. Various ways of age dating has shed new light on ages and sedimentation rates of the established stratigraphy. Proxies such as microfossils and isotope evidence are giving us new insights to the paleoceanography of the Arctic Ocean basin. Core 92AR-P25 from the Northwind Ridge shows correlation with the paleomagnetic time scale and agreement with the manganese color cycles proposed by Jakobsson et al, (2000). The correlation of the core, shows that many cores throughout the Central Arctic Ocean can be similarly correlated, allowing us to form a paleoceanography history of the Arctic Ocean.