A Comparison of Diagnostic Interviews for Children 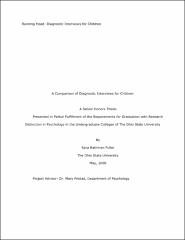 Several diagnostic interviews have been developed for use with children. However, there is little empirical evidence to support the effectiveness of these interviews (Mash & Hunsley, 2005). Two interviews, the Schedule for Affective Disorders and Schizophrenia for School Aged Children (K-SADS) (Puig-Antich & Chambers, 1978), and the Children’s Interview for Psychiatric Syndromes/Parent-Children’s Interview for Psychiatric Syndromes (ChIPS/P-ChIPS) (Weller, Weller, Rooney, & Fristad, 1999a & 1999b), were compared to examine the efficacy of different diagnostic interviews used with children. Each interview was administered to 25 parent-child informant pairs from the Longitudinal Assessment of Manic Symptoms (LAMS) study at The Ohio State University. Children were split into two groups, 7-10 years and 11-14 years, and diagnoses from each interview and a clinician report were compared for the older and younger groups. Findings showed no age effect for agreement between each interview and clinician report. However, the older group showed higher agreement between ChIPS summary and K-SADS diagnoses than the younger group. Finally, child K-SADS interviews alone reported too few diagnoses to compare with the ChIPS, which may suggest the superiority of the ChIPS at eliciting responses from children.