From Manga to Comic: Visual Language in Translation 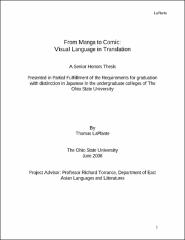 Comics, under the umbrella of sequential art, constitute their own special medium with their own vocabulary, conventions, and use of symbols. They present their own unique problems to the translator, not least of which is the fact that the translator must successfully bridge the gap between not just two languages, but three: present in every form of sequential art is an elusive visual language, which is at once universal and provincial – and for which there are no dictionaries. In Japan, where the comic medium (manga in Japanese) grew over time to become one of the most pervasive forms of entertainment and communication, the visual language present in comics reached levels of complexity and sophistication unseen on such large scale in similar productions throughout the rest of the world until relatively recently, and even then due in large part to the influence of these Japanese works. This paper will explore the nature of visual language, how it presents itself in comics, and then apply the resulting framework to the translation of manga. Advisor: Richard Torrance