A Role for Antisense Transcripts in Regulation of Viral Gene Expression 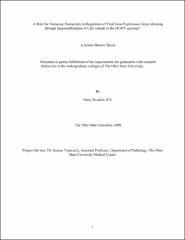 Human cytomegalovirus (HCMV) infections are prevalent in human populations and may engender serious diseases, particularly in individuals with compromised or immature immune systems. The Trgovcich laboratory conducted an analysis of the HCMV transcriptome using a cDNA library approach. This analysis led to the discovery that noncoding and antisense (AS) transcripts accumulate to high levels during infection (21). Such findings support the idea that the complexity of viral gene products is greater than previously recognized. Moreover, these findings suggest that epigenetic regulatory mechanisms influence the viral life cycle. Antisense transcripts have been shown to function in regulating gene expression through transcriptional interference and masking of regulatory elements involved in splicing, localization, and translation. Antisense transcripts also serve as primary transcripts for miRNAs. In addition, they are implicated in gene silencing through methylation of CpG islands associated with gene promoter regions (11). This latter process is known to be involved in genomic imprinting and silencing of genes on the inactive X chromosome (20). We set out to test the hypothesis that AS transcripts mediate the silencing of viral gene promoters associated with CpG islands and that this is an important mechanism in regulating the pattern of viral gene expression. CpG islands were mapped across the entire viral genome and overlapping AS transcripts were identified. It was expected that methylated regions of the genome would be resistant to cutting with methylation sensitive restriction enzymes, and that this could be observed by an alteration in the sizes of DNA fragments generated after digestion with these enzymes. The DNA fragments were measured by size separation on agarose gels combined with Southern transfer and hybridization techniques using probes specific for 5 selected genomic regions. Upon analysis, all five regions yielded evidence of patterns consistent with unmethylated CpG dinucleotides. The major limitation of this method was the limited number of CpG dinucleotides within the genome that could be analyzed. As an alternate approach, the lab will investigate methylation of the genome using two approaches. First, we will employ a liquid chromatography and mass spectroscopic approach to directly detect and measure methylated cytosines in viral genomic DNA. If successful, we will use a modified “ChIP on chip” (Chromatin IP) approach to specifically identify methylated regions of the genome. Presumptive methylated regions will be isolated through restriction digests of viral DNA followed by immunoprecipitation with an antibody specific for 5-methylcytosine. These regions will be identified by hybridization to a tiling array of the HCMV genome. We expect these studies to provide a global view of genome methylation and definitively determine methylation status in the genome. Most importantly, by mapping the putative methylated regions, it will be possible to correlate methylated regions with the positions of the antisense transcripts. These studies will lay the groundwork for future studies to determine if antisense transcription in the HCMV genome functions to regulate CpG island methylation and viral gene transcription.

The Ohio State University; College of Arts and Sciences/College of Biological Sciences