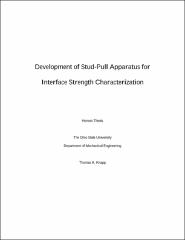 Stud-pull testing is used to measure the pull-off strength, or adhesion, of a coating to a rigid substrate. A stud, made of some rigid material, is connected to the coated substrate with the strongest available adhesive and once the adhesive has cured, the stud is separated from the substrate. It is important that the stud-adhesive interface and the adhesive-coating interface are stronger than the coating-substrate interface because failure will occur at the weakest interface in the system. The adhesion of the coating is determined by measuring the greatest perpendicular tensile force that can be applied to the coated area before failure occurs. The pull-off strength will depend on both material and instrumental parameters [14]. A stud-pull apparatus requires a moving actuator that separates the stud from the substrate and a fixed base that holds the substrate in place. The actuator and accompanying load cell (used to measure the force) were provided for by an 800LE series load frame from TestResources. The remaining components were designed to accommodate 1” diameter circular substrates with seven coating islands of 3/16” diameter. It is desirable to have a self-aligning stud such that the stud is perpendicular to the specimen regardless of the substrate’s surface features. This was accomplished by inserting an inline ball joint between the load cell and the stud, giving the stud the freedom to pivot and twist in all directions. The end of the stud which contacted the substrate was made of 1/8” diameter aluminum. This diameter was chosen because it is large enough for the stud to be rigid in tension and it is small enough for multiple tests to be conducted on a single 1” diameter substrate. The fixed base of the apparatus consisted of a 2” diameter aluminum “table” that fastened to the base of the load frame and a 2” diameter retaining ring that fastened over the table. The substrate was centered on the table and the retaining ring clamped over the substrate, effectively holding the substrate in a stable position. During test preparation, epoxy was applied to the end of the stud and the stud was inserted through the center of the retaining ring to reach the coated area of the substrate. When testing occurred, the stud was raised through the center of the retaining ring by the load frame actuator and the load, position, and time at failure were noted. The first 22 stud-pull tests were conducted with uncoated aluminum substrates for the purpose of testing the pull-off strength of the epoxy. Loctite E-120HP Ultra-Strength epoxy was chosen for its rated tensile strength of 5900 psi, which was the highest available strength. The initial tests varied cure time of the epoxy, separation rate of the stud from the substrate, and surface roughness of the aluminum substrate. The next 14 tests were conducted with painted aluminum substrates. A template was designed and machined to easily spray-paint square aluminum test pieces with seven islands of 7/32” diameter. The Aervoe Rust Proofing Paint was chosen for its availability in the lab and for its useful applications as a common interface. Two painted substrates with seven islands each were tested: one with a smooth surface, the other with a rough surface. The effects of cure time and surface roughness were evaluated. Now that the stud-pull apparatus has been thoroughly tested under various conditions and after numerous complications, it can be used to test more significant specimens. The initial motivation for this project was to evaluate the anode-electrolyte interface strength of specimens that have applications in solid oxide fuel cells (SOFC’s), but no SOFC specimens could be tested due to their high cost and difficulty to obtain. However, it was imperative that the stud-pull apparatus be tested extensively before real specimens could be used. Any loss of data from an SOFC specimen would be a very costly error. Advisor: Dr. Mark E. Walter