Assimilation of Airborne Imagery with LIDAR for Bathymetric Estimation 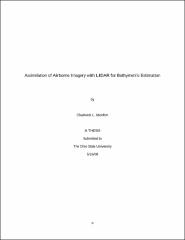 For predictive means it is important to know the underlying bathymetry of the nearshore coastline, however, this region’s turbulent nature and tendency to develop rapidly over large scales make it difficult to survey. A better capability to measure bathymetry over large scales is a crucial step in better understanding nearshore processes and protecting infrastructure from erosion. An airborne Light Detecting and Ranging (LIDAR) system has the ability to survey large geographic areas over both dry land and shallow water, while maintaining a high rate of data collection, making it ideal for the study of coastal regions. Bathymetric LIDAR is dependent on water clarity, and in the surf zone sediment and air bubbles entrained in the water column by wave breaking compromise its ability to retrieve accurate bottom elevations. This work explores the potential of data assimilation techniques to estimate bathymetry in regions where airborne LIDAR fails. This is accomplished using pixel intensities extracted from time-averaged airborne imagery and scaled appropriately to be representative of spatial patterns of energy dissipation due to wave breaking. Following Van Dongeren, et al. (2008), differences between scaled image pixel intensity patterns and dissipation patterns numerically calculated using a wave model were iteratively converged upon by appropriately modifying an initially estimated bathymetry. Final assimilated bathymetry estimates were compared to surveyed bathymetry data collected at the USACE Field Research Facility in Duck, NC using traditional methods. Analysis of data sets from several dates produced RMS errors between assimilated and surveyed bathymetry to be typically around 35 cm.