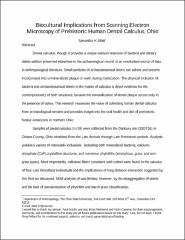 Dental calculus, though it provides a unique calcium reservoir of bacteria and dietary debris seldom preserved elsewhere in the archaeological record, is an overlooked source of data in anthropological literature. Small particles of archaeobotanical debris can adhere and become incorporated into unmineralized plaque on teeth during mastication. The physical inclusion of bacteria and archaeobotanical debris in the matrix of calculus is direct evidence for the contemporaneity of both structures, because the mineralization of dental plaque occurs only in the presence of saliva. This research reassesses the value of collecting human dental calculus from archaeological remains and provides insight into the oral health and diet of prehistoric Native Americans in northern Ohio. Samples of dental calculus (n=19) were collected from the Danbury site (33OT16) in Ottawa County, Ohio inhabited from the Late Archaic through Late Prehistoric periods. Analysis yielded a variety of noticeable inclusions, including both mineralized bacteria, calcium-phosphate (CaP) crystalline structures, and numerous phytoliths (amorphous, grass, and non-grass types). Most importantly, cellulose fibers consistent with cotton were found in the calculus of four Late Woodland individuals and the implications of long-distance interaction suggested by this find are discussed. SEM analysis of was limited, however, by the disaggregation of debris and the lack of standardization of phytolith and starch grain classification.