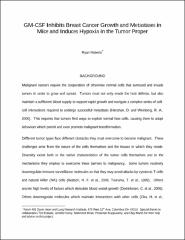 Background: Scientists have begun to appreciate the important role that normal body tissues play in cancer development and progression. Recent studies demonstrate that cancer cells can trick blood vessels and other cells into helping tumors grow and spread. In 2001, Lin, et al, showed that mice unable to produce M-CSF (a growth factor which stimulates a certain type of immune cell called a macrophage) can still get breast tumors, but these tumors don't spread. We later proved that those findings could be explained, at least in part, by the fact that M-CSF makes macrophages produce and secrete VEGF, a powerful stimulator of blood vessel growth. During these studies, we discovered that another macrophage growth factor, GM-CSF, reduced levels of VEGF by causing these macrophages to release a soluble VEGF receptor (sVEGFR), which binds to VEGF and prevents it from stimulating blood vessel growth. This led us to speculate that treating actual breast tumors with GM-CSF might reduce blood vessel formation and limit tumor growth and spread. The work presented here focuses on characterizing the effects of GM-CSF on tumors and evaluating its therapeutic potential for the treatment of breast cancer. Methods: To test our hypothesis, we injected breast cancer cells into a single mammary gland of normal female mice. After a noticeable breast tumors formed, we began to treat these mice with injections of PBS or GM-CSF into the tumor three times a week. The diameter or the breast tumors was recorded weekly. In a subset of these mice, we also followed oxygen concentration in the tumor using novel imaging methods. At euthanasia, we collected tumor and lung tissues for further analysis. Results: GM-CSF slows the growth of breast tumors and prevents them from spreading in our mouse model. Such effects coincide with reduced oxygen levels and increased cell death within the tumor. PBS-treated tumors demonstrate a single focus of necrosis at the point most distant to the blood supply, near the skin. In contrast, GM-CSF treatment resulted in a multifocal pattern of necrosis with foci distributed across the tumor mass. Co-administration of antibodies directed against sVEGFR with GM-CSF in the same tumor model demonstrated rates of growth similar to vehicle control injections, while isotype antibodies had no effect. Implications: Our data suggest that GM-CSF treatment reduces tumor growth and spread. The mechanism behind this effect includes reduction of available oxygen within the tumor environment, presumably due to release of sVEGFR and subsequent insensitivity to blood vessel growth signals. Importantly, these data show that it may be possible to alter the behavior of normal cells that have been manipulated by cancers to facilitate tumor growth and spread. Not only does this observation present new ideas about ways we might treat tumors, but it also provides new models for studying the mechanisms that underlie blood vessel invasion and the spread of tumors to distant sites.