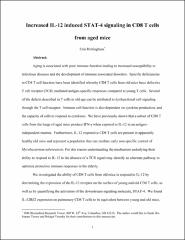 Aging is associated with poor immune function leading to increased susceptibility to infectious diseases and the development of immune associated disorders. Specific deficiencies in CD4 T cell function have been identified whereby CD4 T cells from old mice have defective T cell receptor mediated antigen-specific responses compared to young T cells. Several of the defects described in T cells in old age can be attributed to dysfunctional cell signaling through the T cell receptor. Immune cell function is also dependent on cytokine production, and the capacity of cells to respond to cytokines. We have previously shown that a subset of CD8 T cells from the lungs of aged mice produce IFN-γ when exposed to IL-12 in an antigen-independent manner. Furthermore, IL-12 responsive CD8 T cells are present in apparently healthy old mice and represent a population that can mediate early non-specific control of Mycobacterium tuberculosis. For this reason understanding the mechanism underlying their ability to respond to IL-12 in the absence of a TCR signal may identify an alternate pathway to optimize protective immune responses in the elderly. We investigated the ability of CD8 T cells from old mice to respond to IL-12 by determining the expression of the IL-12 receptor on the surface of young and old CD8 T cells, as well as by quantifying the activation of the downstream signaling molecule, STAT-4. We found IL-12Rβ2 expression on pulmonary CD8 T cells to be equivalent between young and old mice, and therefore hypothesized that IL-12 signaling in pulmonary CD8 T cells was increased in old age. To test this hypothesis, single cell suspensions from young and old mice were given IL-12 for 4 hours, and STAT-4 phosphorylation in CD8 T cells was determined using flow cytometric analysis. In response to IL-12, pulmonary CD8 T cells from old mice had increased levels of phosphorylated STAT-4 within individual CD8 T cells, and old mice possessed significantly more CD8 T cells that could phosphorylate STAT-4 in response to IL-12 compared to young, leading to an increased number of CD8 T cells that could secrete IFN-γ. To confirm STAT-4 activation was a direct consequence of IL-12 stimulation, STAT-4 phosphorylation was determined in purified CD8+ cells from young and old mice. IL-12-induced STAT-4 phosphorylation was detected in purified CD8+ cells from both ages of mice, illustrating that IL-12 could act directly on CD8+¬ cells. Importantly, the proportion of CD8+ cells that could phosphorylate STAT-4, and the amount of phosphorylated STAT-4 in each cell was significantly greater in CD8+ cells from old mice. These data demonstrate that old mice possess a substantial population of CD8 T cells exhibiting increased STAT-4 phosphorylation in response to IL-12, which ultimately leads to enhanced IFN-γ production. We therefore define a mechanism for the increase in IL-12-induced IFN-γ secretion by CD8 T cells in old mice. A more comprehensive understanding of the unique contribution of CD8 T cells to innate immunity in old mice could lead to the development of more efficacious therapies in the elderly for combating pulmonary infections.