We Shall Lead: Freedom Schools and the Creation of Black Youth-based Leadership 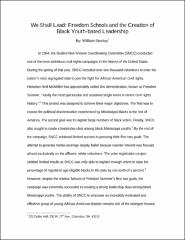 The goal of this paper is to examine the response to, and judge the effectiveness of, the Freedom Schools that were built and conducted by the Student Non-violent Coordinating Committee (SNCC) during its 1964 Freedom Summer project. Prior to this protest, African Americans in Mississippi were mired in one of the deepest states of educational poverty seen in modern American history. Only seven percent of the state’s black residents even held a high school diploma in 1964. Many black residents did not know how many states composed their country, or even what its capital was. A lot of them did not even know about the rights guaranteed to them by the 14th Amendment passed nearly 100 years before. To remedy this situation, SNCC brought hundreds of college-aged volunteers into the state during the summer of 1964. The research methods used for this paper vary greatly and include a variety of secondary sources, the vast collection of SNCC Papers, letters from volunteers, letters from students, various accounts recorded in diaries and programs, pictures, and even the actual projects done by the dynamic black students in 1964 in order to understand the effectiveness of the Freedom Schools. My research indicates that the Freedom Schools were by far the most successful aspect of the Summer project. Black youths attended the schools at more than 200% of the rate expected by SNCC. These students were incredibly enthusiastic and instantly became active leaders in their communities. After only a few weeks in the schools, African American children started leading sit-ins, voter registration campaigns, and creating their own organizations. In Hattiesburg, junior high students started a program for middle-aged adults where they would teach them how to fill out voter registration cards. The implications of this research are widespread. First, as several noted scholars have observed, Freedom Schools have often been overlooked, both then and now. The schools were largely considered to be women’s work and more attention was paid to other activities occurring during the 1964 protest. This paper not only discusses the strong role that women played in the project, but also forces historians to re-think the achievements of the civil rights movement. This research also follows a current trend in civil rights history that looks at the importance of grassroots activism. The Freedom Schools, I argue, were the purest form of grassroots activism to occur during the modern African American freedom struggle. They were based on the model developed by Myles Horton at the Highlander Folk School. This model of citizenship learning spread throughout the South during the 1940s and 1950s and became one of the most important ideological bases for the civil rights movement. This research on the Freedom Schools shows the power of this model. Freedom Schools became one of the most encouraging aspects of the civil rights movement, and this paper argues that this model should be copied for use in future protests or activism.