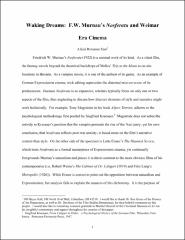 Friedrich W. Murnau’s Nosferatu (1922) is a seminal work of Expressionist cinema, yet contemporary scholarship on the film fails to synthesize formal qualities with thematic content. For example, Tony Magistrale, in his book Abject Terrors, adheres to the psychoanalytical methodology first posited by Siegfried Kracauer. Magistrale does not subscribe entirely to Kracauer’s position that the vampire portends the rise of the Nazi party. However, his own conclusion, that Nosferatu reflects post-war anxiety, is based more on the film’s narrative content than style. In another example, Lotte Eisner, in her book The Haunted Screen, touts Nosferatu as a formal masterpiece of the style, yet continually foregrounds Murnau’s naturalism and places it in direct contrast to the more obvious films of his contemporaries (i.e. Robert Weine’s The Cabinet of Dr. Caligari (1919) and Fritz Lang’s Metropolis (1926)). While Eisner is correct to point out the opposition between naturalism and Expressionism, her analysis fails to explain the nuances of this dichotomy. It is the purpose of this paper then to detail the instances of naturalism and Expressionism in F.W. Murnau’s Nosferatu in order to discuss why the contrast exists. It is my position that Murnau utilizes formal aspects to delineate a specific thematic geography within the film. On one hand is “reality” – that which is objective and rational - expressed through naturalism. On the other hand is the supernatural – that which is subjective and irrational - represented by the kind of optic distortion typical of German Expressionism. Between these two poles is an intermediary realm best illustrated by a lighting “mistake;” the shadow of the vampire. I posit that middle spaces such as latter are the truly Expressionistic moments in the film because Murnau not only questions the fabric of reality through formal means, but also exposes the horror of Nosferatu as real via plot development. In this view, neither the objective nor the subjective has precedence. Instead, the narrative is supported by cinematic techniques as a plausible circumstance where the unthinkable is true; a state much like the post-war anxiety German Expressionism is touted to characterize.