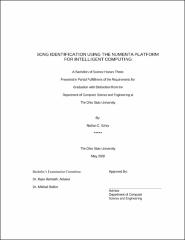 Hierarchical Temporal Memory (HTM) technology is a new computing paradigm based on the structure and function of the human neocortex [15]. HTM networks are the cornerstone technology in the Numenta Platform for Intelligent Computing (NuPIC), a new tool for artificial intelligence research developed by Numenta Incorporated. NuPIC provides researchers with a series of tools that they can use to train and test their HTM networks. Ultimately the developers of NuPIC believe that the long term applications will include image analysis, robotics, data mining, and intelligent systems for traffic monitoring and weather prediction [7]. However, up to this point HTM networks have only been used to develop a simple vision system that is limited to recognizing a small set of line drawings. Before researchers can claim to have realized the ultimate promise of NuPIC, they must utilize the technology to solve problems across wide range of subjects. The purpose of the research presented in this thesis is to provide an experience report of HTM technology and identify best practices for future HTM researchers. In order to facilitate this experience a solution to the non-trivial problem of song identification was developed. This problem is well-researched and hundreds of papers have been written that range from using signal processing techniques [13] to sampling an artist’s work for unique features [16]. Several advanced solutions using existing technologies have been created and developing an equivalent solution to this problem using NuPIC helped identify several areas in need of more in-depth research. In order to ensure that a successful song identification development experience was reached, several preparatory steps were taken. At the beginning of this research NuPIC was a relatively new artificial intelligence framework and there were no established processes for design, implementation, or testing. To remedy this shortcoming, NuPIC’s extensive training material was used to develop a more formal methodology for using the technology. One of the first steps in this newly created process was to develop an in-depth understanding of the data being used. In order gain this knowledge multiple digital music formats were researched. This analysis revealed that the Midi music format was the best candidate to produce data for HTM network consumption. The next step was then to use the Midi song data to run several song identification experiments using NuPIC in order to test different encoding schemes and diverse HTM network structures. A data encoding scheme based on melodic segmentation yielded an identification accuracy of 100% and supports the conclusion that NuPIC is a valid platform for further research in the area of song identification. The song identification development experience also identified several areas in need of more in-depth research. Many of the algorithms used in HTM networks are designed to work with very specific data encoding schemes. In order for HTM technology to gain more widespread use, these algorithms must be improved. HTM networks also require that input data follows a strict partition-based format. Switching to a XML-based data input format would allow researchers to quickly generate and validate data sets. Lastly, the development experience presented in this thesis shares many similarities with the development processes created by the data mining community. Researchers wishing to increase their likelihood of success should look for ways to incorporate the data mining community’s knowledge into their research.