Constructing a First Impression of Japan: Recreating a Photo Album of Felice Beato 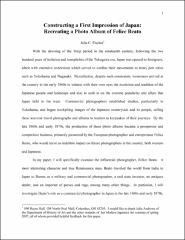 With the dawning of the Meiji period in the nineteenth century, following the two hundred years of isolation and xenophobia of the Tokugawa era, Japan was opened to foreigners, albeit with extensive restrictions which served to confine their movements to treaty port cities such as Yokohama and Nagasaki. Nevertheless, despite such constraints, westerners arrived at the country in the early 1860s to witness with their own eyes the exoticism and tradition of the Japanese people and landscape and also to cash in on this allure. Western commercial photographers established studios, particularly in Yokohama, and began compiling stock images of the Japanese countryside and its people, selling these souvenir travel photographs and albums to tourists as keepsakes of their journeys. By the late 1860s and early 1870s, the production of these photo albums became a prosperous and competitive commercial enterprise, primarily pioneered by the European photographer and entrepreneur Felice Beato, who would leave an indelible impact on subsequent photographers in the country, both western and Japanese. However, western photographers such as Beato did not always portray the reality of Japanese life but rather presented to the tourist a constructed first impression of Japan, one which was antiquated, exotic, charming, or even violent. In my paper, I specifically examine the life and career of the gregarious and cosmopolitan Felice Beato. A most interesting character and true Renaissance man, Beato traveled the world from India to Japan to Burma as a military and commercial photographer, a real estate investor, an antiques dealer, and an importer of purses and rugs, among many other things. In particular, I investigate Beato's role as a commercial photographer in Japan in the late 1860s and early 1870s, specifically attempting to recreate one of his popular and influential tourist photo albums through an examination of both his remaining photographs reproduced in monographs as well as extant photo albums. In compiling these selected photos into a recreated album, I briefly analyze the images, attempting to decipher what they would have communicated to westerners and the Japanese stereotypes that they reinforced. In the end, I establish that many of the images within the photo albums of Beato served as constructed and contrived first impressions of the country and in fact often contradicted the modernization occurring in nineteenth century Japan. Overall, an examination and attempted recreation of one of Beato's photo albums provides essential information regarding the west's relationship with and conception of Japan at the dawn of the twentieth century.