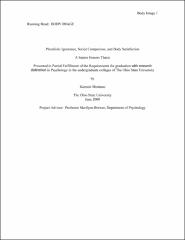 The current study explored different aspects of body image and weight concerns, with the hopes of learning more in this area that could help women deal with weight issues related to the thinness ideals represented in the media and other cultural norms. Specifically, the study investigated pluralistic ignorance in the domain of body image, and the differences between high and low body satisfied women when making social comparisons to media images. Female undergraduates (N = 156) with high and low body satisfaction were exposed to advertisements that portrayed either thin models, plus-size models, or no models at all and were then measured on self-evaluation and body image. No effects of the ads were obtained, which could have been due to relatively weak stimulus materials. Participants were also asked a series of self and other questions in order to measure the difference between their own weight concerns and their perceptions of others’ weight concerns. Pluralistic ignorance was seen in two out of the four measures and there was a main effect of body satisfaction found in three, such that low body satisfaction participants believed that they as well as others were more concerned about weight. Although it was not shown that self-evaluation could be predicted by the perception of others, this could reflect an undetected indirect effect that could be looked at more closely in future studies. This research provides some evidence for the existence of pluralistic ignorance in the domain of body image. These findings may be used in future studies to look at the not only pluralistic ignorance, but also its relation to body satisfaction, with the hopes of ultimately changing women’s perceptions about weight and body image.