The United States and Iraq: Why We're There, Where We're Going: An Educational Forum 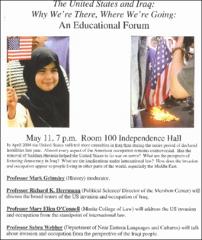 In April 2004, the United States suffered more casualities in Iraq than during the entire period of declared hostilities last year. Almost every aspect of American occupation remains controversial. Has the removal of Saddam Hussein helped the United States in its war on terror? What are the prospects of fostering democracy in Iraq? What are the implications under international law? How does the invasion and occupation appear to people living in other parts of the world, especially the Middle East