The Iraq War: A Military History 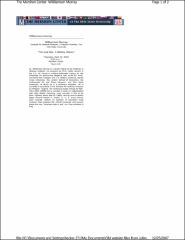 Dr. Williamson Murray is a Senior Fellow at the Institute of Defense Analysis. He received his Ph.D. (after service in the U.S. Air Force) in military-diplomatic history at Yale University. Dr. Murray has taught at Yale, at the Air, Army, and Naval War Colleges, the U.S. Military Academy, Marine Corps University, the London School of Economics, the Smithsonian Air and Space Museum, and Ohio State University, of which he is a professor emeritus. He is currently a consultant at the Institute for Defense Analyses in Arlington, Virginia. His numerous books include Air War, 1914-1945 (1999) and a number of works in collaboration with Allan Millett, including, most recently, A War to Be Won: Fighting World War II (1999). Murray and co-author Major General Robert H. Scales, Jr. U. S. Army retired, have recently written an analysis of Operation Iraqi Freedom that analyses the critical meanings and lessons about the new "American way of war" as it has unfolded in Iraq.