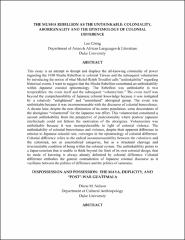 With the collapse of the Soviet Union, many anticipated the advent of a “new world order” of global capitalism, or even an “end to history,” implying that conflicts based on ideology and competing national interests and identities would lose their political relevance in the post-Cold War era. Quite to the contrary, the 1990s saw an upwelling of ethnic and religious violence in locations as disparate as the former Yugoslavia, Central Africa, South Asia, and the Middle East. Prior to the events of 9/11, the structure of international relations had still made it possible to imagine that such conflicts had local roots and were thus exclusively of regional consequence. The events of 9/11, however, rendered undeniable the global significance of local ethnic and religious-based differences. It is now an inescapable conclusion that social identities are everywhere threatened from within by local and ethnic formations, conditioned in their response by the prerogatives and ambitions of the state and its actors, and transformed from without by the global flows of capital, popular culture, and transnational ideologies and populations. As features of the contemporary world, deprivation, violence, and identities are but the local manifestations of the conflict between global systems of thought, power, and authority.