Identification and Characterization of Bacillus anthracis Spores by Flow Cytometry 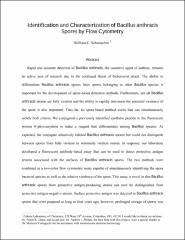 Rapid and accurate detection of Bacillus anthracis, the causative agent of anthrax, remains an active area of research due to the continued threat of bioterrorist attack. The ability to differentiate Bacillus anthracis spores from spores belonging to other Bacillus species is important for the development of spore-based detection methods. Furthermore, not all Bacillus anthracis strains are fully virulent and the ability to rapidly determine the potential virulence of the spore is also important. Thus far, no spore-based method exists that can simultaneously satisfy both criteria. We conjugated a previously identified synthetic peptide to the fluorescent protein R-phycoerythrin to make a reagent that differentiates among Bacillus species. As expected, the conjugate selectively labeled Bacillus anthracis spores but could not distinguish between spores from fully virulent or minimally virulent strains. In response, our laboratory developed a fluorescent antibody-based assay that can be used to detect protective antigen protein associated with the surfaces of Bacillus anthracis spores. The two methods were combined in a two-color flow cytometric assay capable of simultaneously identifying the spore bacterial species as well as the relative virulence of the spore. This assay is novel in that Bacillus anthracis spores from protective antigen-producing strains can now be distinguished from protective antigen-negative strains. Surface protective antigen was detected in Bacillus anthracis spores that were prepared as long as four years ago; however, prolonged storage of spores was found by transmission electron microscopy to cause degradation of the exosporium and a loss of binding to the species-specific peptide. Based on the results of this study, we classified a set of prototypical flow cytometry dot-plot patterns that can be used to predict the species and relative virulence of unidentified samples of Bacillus spores in as little as one hour.