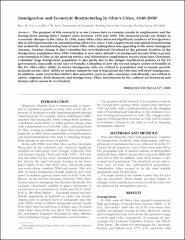 The purpose of this research is to use Census data to examine trends in employment and the foreign-born among Ohio’s largest cities between 1940 and 2000. The observed trends are linked to economic changes in the cities. In 1940, many Ohio cities attracted significant numbers of foreign-born due to job opportunities in manufacturing. However, since 1940, employment and spatial restructuring has eroded the manufacturing base of most Ohio cities, making them less appealing to the newer immigrant streams. Another change is that Columbus has overshadowed Cleveland as the primary location of the foreign-born population since 1940. Columbus is now more attractive to immigrants because it has a greater concentration of jobs in the growing service and information employment sectors than does Cleveland. Columbus’ large foreign-born population is also partly due to the refugee resettlement policies of the US government, especially in the case of Somalis. Columbus is now the second largest center of Somalis in the US. Ohio cities’ ability to attract immigrants, who are critical to population and economic growth, depends on the cities’ ability to nurture industries that will generate the jobs that will draw immigrants. In addition, some researchers believe that amenities, such as cafes, museums, and diversity, are critical to attract migrants, both domestic and foreign-born. Thus, investments in the cultural environment and human talent cannot be overlooked.