Changes in Older and Younger Woods in West-Central Ohio 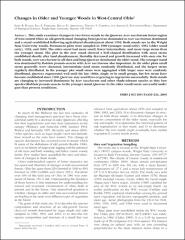 This study examines changes in two forest stands in the Quercus-Acer saccharum forest region of west central Ohio: an old-growth stand changing from Quercus-dominated to Acer saccharum-dominated and a stand established following agricultural abandonment about 1950. Both stands are in the Wright State University woods. Permanent plots were sampled in 1980 (younger stand only), 1982 (older stand only), 1993, and 2000. The older stand had more small, fewer intermediate, and more large stems than the younger stand. The plot in the new stand showed a bell-shaped distribution with most stems established shortly after land abandonment. Mortality decreased and growth increased with stem size for both stands. Acer saccharum in all sizes and large Quercus dominated the older stand. The younger stand was dominated by Robinia pseudo-acacia with Acer saccharum also important. In the older plots small stems generally were clustered, intermediate-sized stems randomly distributed, and the largest stems regularly distributed. In the younger plot small stems were aggregated while larger ones were randomly distributed. Quercus regenerated well until the late 1800s, singly or in small groups, but few stems have become established since 1900. Quercus may need fires or grazing to regenerate successfully. Both stands are changing to increased dominance by Acer saccharum and other shade-tolerant species as they lose species (Robinia pseudo-acacia in the younger stand, Quercus in the older stand) more successful under past than present conditions.