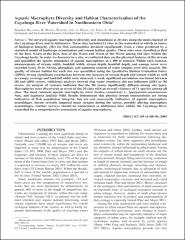 We surveyed aquatic macrophyte diversity and abundance at 20 sites along the main channel of the Cuyahoga River and its tributaries. These sites included 12 sites in the watershed at which an Index of Biological Integrity (IBI) for fish communities deviated significantly from a value predicted by a statistical model of landscape urbanization and stream habitat quality. These sites were classified as Best of the Best, Worst of the Best, Best of the Worst and Worst of the Worst among 164 sites within the Cuyahoga basin. In order to characterize a site, we collected data on the physical features of the stream and quantified the species abundance of aquatic macrophytes in a 100 m transect. Within each transect, measurements of stream width, bankfull width, stream depth, bankfull depth, and canopy cover were recorded every 10 m. Nitrate, phosphate, and ammonia content of water samples were also assayed. The quality of stream habitat for each site was quantified using the Qualitative Habitat Evaluation Index (QHEI). Strong significant correlations between the measure of stream depth and stream width as well as canopy coverage and bankfull width were observed. A weak significant correlation was found between IBI and QHEI scores. Additional analysis showed that water chemistry did not influence QHEI or IBI scores. An analysis of variance indicated that the IBI scores significantly differed among site types. Macrophytes were discovered at seven of the 20 sites with an overall richness of 11 species among all sites. The most common aquatic macrophytes were: Elodea canadensis L., Sparganium americanum Nutt., and Sagittaria latifolia Willd. Results demonstrate that physical stream characteristics are strong indicators of fish population integrity, but are not necessarily indicative of aquatic macrophyte assemblages. Storms severely impacted many streams during the survey, possibly altering macrophyte assemblages. Further surveys should be undertaken at additional sites within the Cuyahoga River watershed for a comprehensive assessment of aquatic macrophytes.