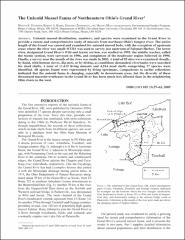 Unionid mussel distribution, numbers, and species were examined in the Grand River to provide a recent and comprehensive study of mussels from northeast Ohio’s longest river. The entire length of the Grand was canoed and examined for unionid mussel beds, with the exception of upstream areas where the river was small; SCUBA was used to survey just upstream of Fairport Harbor. The lower river, designated Grand River’s Wild and Scenic section, was studied in 1995, the middle reaches, called the Scenic section, were surveyed in 1996, and completion of the headwater region followed in 1998. Finally, a survey near the mouth of the river was made in 2002. A total of 95 sites were examined visually, by hand, with bottom sieves, dip nets, or by diving, as conditions demanded; riverbanks were searched for dead shells. A total of 11,625 living mussels and 4,514 dead shells comprising 27 species were identified. All species found were represented by living specimens. Comparisons to earlier collections indicated that the unionid fauna is changing, especially in downstream areas, but the diversity of these threatened acroinvertebrates in the Grand River has been much less affected than in the neighboring Ohio rivers to the west.