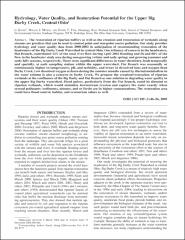 The restoration of riparian buffers as well as the creation and restoration of wetlands along streams are practices that can be used to control point and non-point source pollution. Our study provides hydrology and water quality data from 2000-2002 in anticipation of recommending restoration of the headwaters of the Big Darby Creek Watershed in central Ohio. One tributary of concern in the headwaters, Flat Branch, contributed 11% of the total river flow during April 2002 flooding and 56 and 88% of the flow in the headwater study area during non-growing (winter and early spring) and growing (summer and early fall) seasons, respectively. There were significant differences in water chemistry, both temporally and spatially, at each sampling station within the upper watershed. Flat Branch was seasonally or continuously higher in temperature, pH, and turbidity, and lower in dissolved ions and oxygen than Darby Creek. Low dissolved oxygen at dawn during the summer months caused by diurnal metabolism in the water column is also a concern in Darby Creek. We propose the creation/restoration of riparian wetlands at the confluence of the Big Darby and Flat Branch as one solution to degrading water quality in the upper Big Darby watershed. Flood pulses, particularly from the Flat Branch, could be directed to riparian wetlands, which would minimize downstream erosion and capture the water exactly when several pollutants (sediments, nitrates, and so forth) are in higher concentrations. The restoration area could have flood control, habitat, and ecotourism values as well.