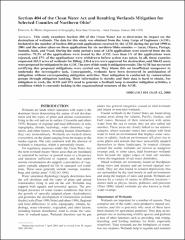 This study examines Section 404 of the Clean Water Act to determine its impact on the destruction of wetlands. The data for this study was obtained from the Army Corps of Engineers (ACOE). Included is the number of Section 404 permit applications received by the ACOE during the period 1990 to 2001 and the action taken on these applications for six northern Ohio counties — Lucas, Ottawa, Portage, Summit, Stark, and Wood. During the study period a total of 1,676 applications were received from the six counties. 79.3% of the applications were issued by the ACOE. Less than 1% of the applications were rejected, and 17% of the applications were withdrawn before action was taken. In all, these counties requested 283.5 acres of wetlands for filling. 238.4 acres were approved for destruction, and 586.82 acres were proposed for mitigation by the ACOE. The core of this study is mitigation results. The ACOE has no record certifying that proposed mitigations were carried out. They blame this on insufficient manpower to undertake the investigative task. Consequently, wetlands have been destroyed in anticipation of mitigation without corresponding mitigation activities. Most mitigation is conducted by conservation groups through mitigation banking. Their information is sketchy and their data is hard to obtain. For mitigation to work, the ACOE and EPA need to generate a feedback loop to monitor mitigation activities, a condition which is currently lacking in the organizational structure of the ACOE.