Hydrology, Water Chemistry, and Vegetation Characteristics of a Tamarack Bog in Bath Township, Ohio: Towards Restoration and Enhancement 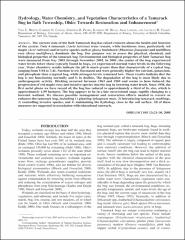 The current state of the Bath Tamarack Bog has raised concern about the health and function of the system. Only 6 tamarack (Larix laricina) trees remain, while deciduous trees, particularly red maple (Acer rubrum) and invasive species such as glossy buckthorn (Rhamnus frangula) and multiflora rose (Rosa multiflora), dominate the bog. Our purpose was to assess the physical, chemical, and biological properties of the tamarack bog. Environmental and biological properties of Bath Tamarack Bog were measured from May 2001 through November 2002. In 2001, the center of the bog experienced water levels below those typically found in bogs, yet experienced normal water levels in the following year. Water chemistry results indicate the pH is much greater than that characteristic of a typical bog, ranging from 5.94 to 7.41. Nutrient levels fluctuated and were generally higher for calcium, potassium, and phosphate than a typical bog, while nitrogen levels remained low. These results indicate that the bog is not functioning normally and is in decline. The degradation of the bog is most likely due to anthropogenic activity. Ditching occurred between 1963 and 1969 and seems to have induced the progression of red maple trees and invasive species into the bog by lowering water levels. Since 1938, the first aerial photo we have record of, the bog has reduced to approximately a third of its size, which is approximately 1.99 hectares. The bog appears to be in a late successional stage, rapidly changing to a forested wetland. We discuss possible management and restoration efforts needed to restore or enhance the tamarack bog, including 1) planting Sphagnum mats, 2) introducing tamarack seedlings, 3) controlling invasive species, and 4) maintaining the hydrology close to the soil surface. All of these measures are suggested in association with educational outreach.