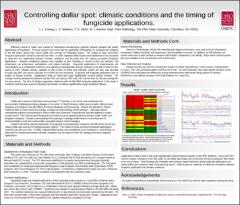 Effective control of dollar spot (caused by Sclerotinia homoeocarpa) typically requires repeated and timely applications of fungicides. Previous research has shown that the application of fungicides to asymptomatic turfgrass in the fall and/or spring may reduce dollar spot severity the following season. The impact of these preventive fungicide applications varied by site and over time. In 2006, replicated field studies were established at two locations to determine the relationship between climatic conditions and the ideal time for making preventive fungicide applications. Weather monitoring stations were installed at both locations to record on-site soil moisture, soil temperature, air temperature, precipitation and relative humidity. Sequential applications of propiconazole and chlorothalonil as a combination treatment were applied to asymptomatic fairway turfgrass in the fall of 2006 and the spring of 2007. Disease severity, assessed as the number of dollar spot infection centers per plot, was recorded through July 2007 and used to calculate an AUDPC for each treatment. In general, fall fungicide applications had no impact on disease severity. Applications made in mid-to-late April significantly reduced disease severity. The average monthly temperature between October 2006 and January 2007 was 2.8C warmer than the 30-year average for the same period. The lack of disease suppression observed with the fall 2006 fungicide applications in this study is consistent with previous reports indicating that climatic conditions significantly impact fungicide efficacy.