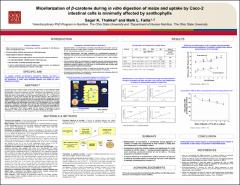 Currently consumed varieties of maize contain limited pro-vitamin A (VA) carotenoids despite relatively high levels of lutein (LUT) and zeaxanthin (ZEA). Here we determined the relative bioaccessibility of pro-VA carotenoids and their interactions with xanthophylls. First, we examined four accessions of maize containing 0.4 – 11.3 µg/g β-carotene (BC) + β-cryptoxanthin (BCX) with ratios of xanthophylls to pro-VA carotenoids ranging from 1.9 – 7.0. Recovery of carotenoids in cooked maize exceeded 80% after simulated digestion. Mean efficiencies of micellarization of BC, BCX, LUT and ZEA were 16.7, 27.7, 30.3 and 27.9%, respectively, and were independent of the ratio of xanthophylls to pro-VA carotenoids. We also digested white maize to which 3.3 µg/g BC in extra light olive oil (2% v/w) and increasing amounts of LUT (0 – 33.3 µg/g) were added. Efficiency of micellarization of BC was 21.7% in the absence of LUT and increased to 30.2% (P < 0.05) when LUT content was 7x that of BC. Incorporation of BC into synthetic micelles also increased (P < 0.05) when LUT to BC ratio was ≥10. Caco-2 cells accumulated 270, 240 and 180 pmol BC/mg cell protein (P < 0.05) in absence of LUT and at LUT to BC ratios of 7 and 13, respectively. These results suggest that the potential bioavailability of pro-VA carotenoids in maize does not appear to be markedly affected by the relative levels of xanthophylls found in cultivars of maize. Supported in part by HarvestPlus & OARDC.

This study was supported by funding from HarvestPlus and Ohio Agricultural Research and Development Center (OARDC).