Prevalence and Persistence of Antibiotic Resistance in Food Products 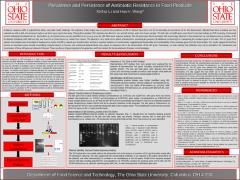 Antibiotic resistance (AR) is a global food safety and public health challenge. The objective of this project was to examine the prevalence of AR in selected food items, and the functionality and persistence of the AR determinants. Selected food items including raw food materials as well as deli and processed ready-to-eat items were used in the study. Tetracycline resistant (Tetr) bacteria were found in raw and deli shrimp, sushi and cheese samples. The tetS, tetL and tetM genes were found in the food isolates by PCR screening. Commensal bacteria including Carnobacterium sp., Brochothrix sp. and Enterococcus sp were identified to be AR-gene carriers by 16S rRNA gene sequence analysis. The AR genes were found associated with several large plasmids in Carnobacterium sp. and Enterococcus sp. isolates. A 20-kb plasmid containing both tetM and tetL was found in an Enterococcus sp. isolate from cheese. The plasmid is very stable at the absent of tetracycline, indicating the presence of additional mechanism(s) in maintaining the resistance gene in the stain. The tetr genes from selected food isolates were transmitted to Sreptococcus mutans UA159 by natural gene transformation and led to acquired resistance in transformants, suggesting the functionality and transferability of the resistance genes from the food isolates. Our results suggest that food has become an important avenue directly transmitting resistant bacteria to humans, and commensal bacteria likely have played an important role in the dissemination of the AR genes. Particularly, our data indicate that antibiotics may not be essential in the maintenance and transmission of these AR genes as believed in the past. These results are of great importance for agriculture and food industry for the development of proper control strategies.