Environmental and Maternal Influence on Colonization of Infant Gastrointestinal Tract by Microorganisms. 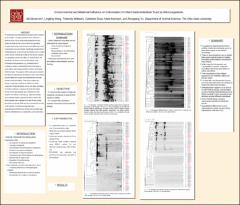 The intestinal microbiota plays important roles in overall human health. The gastrointestinal tract of infants is sterile at birth, but is colonized by bacteria from the mother at birth and the environment. It is generally accepted that human milk does promote differences in the composition of gut microbiota; specifically predominance of bifidobacteria, while formula-fed infants tend to exhibit a more diverse microbiota similar to that found in adults. It is desirable to mimic the effect of human milk on the intestinal microbiota in formula-fed infants using functional food ingredients (e.g., prebiotics and or probiotics). Better understanding of the microbiota in early infancy will help guide efforts towards improving infant formula. The purpose of this study was to examine the effect of maternal gut microbiota on that of the infant, and the differences in gut microbiota between formula-fed and breast-fed infants. This study contains two groups: one group consisting of mothers and their exclusively breast-fed infants (n=22), the other consisting of mothers and their exclusively formula-fed infants (n=20). Fresh fecal samples were obtained from the mothers and infants in each group; maternal samples were collected within 5 days of the infant’s birth, and infant samples were collected at 15 and 28 days of age. Microbial community DNA was then extracted from each of the samples, and denaturing gradient gel electrophoresis (DGGE) was carried out to analyze total bacteria, Bifidobacterium, Lactobacillus, and Bacteroides.