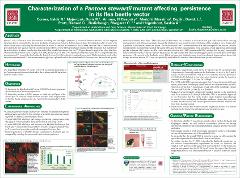 Stewart’s wilt, a disease of corn characterized by wilting and leaf blight symptoms, is caused by Pantoea stewartii, a Gram-negative bacterium that is transmitted by the corn flea beetle, Chaetocnema pulicaria. Little is known about the molecular basis of the interactions of P. stewartii with its flea beetle vector, including the mechanism (s) by which P. stewartii is transmitted. Recent work indicated that P. stewartii carries gene clusters for two type III secretion systems (TTSS). These TTSS gene clusters encode pili-like structures that enable these bacteria to inject virulence proteins into host cells. It has already been shown that one TTSS gene cluster is required for plant infection, whereas the other cluster is not (Coplin, et al. 1992, Frederick, et al. 2001). We hypothesize that the second TTSS is important for the transmission of P. stewartii by flea beetles. To detect P. stewartii in the beetles, two methods were used. The first method involved the detection of transformed P. stewartii that express gfp from a plasmid and in the second method P. stewartii was detected with specific antibodies linked to Alexa-fluor. The localization of the bacteria was visualized in dissected beetle guts with confocal laser scanning microscopy (CLSM). These experiments showed that the bacteria were mainly found in the lumen of the hindgut at up to 10 days after acquisition of the bacteria from corn plants. The localization of two P. stewartii mutants was also investigated. One mutant carried a mutation in the ysaN gene that is part of the second TTSS, and the other had a mutation in the sapD gene, which is part of an antibacterial peptide resistance ABC transporter. The results of colony-forming unit (CFU) counts and CLSM revealed that the ysaN mutants did not persist in the beetles, whereas wild type bacteria and the sapD mutant did. These results suggest that the second TTSS is involved in persistence of P. stewartii in the flea beetle vector.