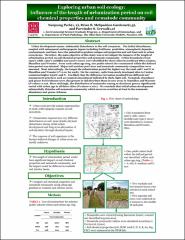 Urban development causes substantial disturbance to the soil ecosystem. The initial disturbance, coupled with subsequent anthropogenic inputs including fertilizers, pesticides, atmospheric deposits, contaminants and heat, have the potential to produce unique soil properties and soil food web in urban ecosystems. Therefore, the main objective of this study was to investigate the impacts of the length of urbanization period on soil chemical properties and nematode community. Urban boundaries from 1920’s (old), 1960’s (middle) and 2000’s (new) were identified for three cities in northeast Ohio; Canton, Massillon and Wooster. From each urban age ring, one public school site constructed within the defined time period was selected. Major soil nutrient pool sizes and nematode community composition were assessed. Most interestingly, the longer the urbanization period the higher was the total soil C and N in Massillon and Wooster (P<0.01 for each). On the contrary, soils from newly developed sites in Canton contained higher total C and N. It is likely that the difference in Canton resulted from different turf management practices such as compost amendment indicated by dark, light soil. Nematode abundance and genus-level richness were also greater in old sites than those in new areas in Massillon and Wooster (P-values<0.10). More strikingly, the distribution of nematodes among 12 dominant genera significantly varied with urban age in all three cities (P-values<0.001). We conclude that initial urban development substantially disturbs soil nematode community which may recover overtime at least in the nematode abundance and genus richness.