Enrichment and isolation of anaerobic thermophilic cellulolytic bacteria from mulch 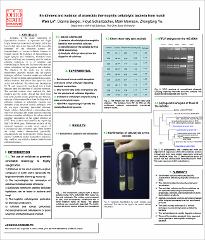 Cellulose is the major component of lignocellulose biomass. It represents the single largest bioenergy resource on our planet, and it has been looked upon to provide much of the renewable bioenergy we can efficiently harness. All biotechnologies to convert cellulosic biomass to biofuels require the hydrolysis of lignocellulose to sugars (glucose and cellubiose). Cellulases from bacteria and fungi are commonly used to mediate cellulose hydrolysis. It is of scientific and biotechnological interest to find more efficient and robust cellulolytic microorganisms and cellulase. The objective of this study was to isolate thermophilic anaerobic bacteria that can rapidly hydrolyze cellulose. A mulch sample was collected from a big pile of mulch and inoculated into a semidefined medium. Ball-milled filter paper was used as the sole substrate. The culture was incubated at 55 ℃ and successively transferred into a fresh medium upon the depletion of cellulose substrate. The enriched cultures were analyzed for their products and the results showed that short chain fatty acids, mainly acetate, propionate and butyrate, made up of the main products from the digestion of cellulose. Isolation of cellulolytic bacteria was attempted using the plate overlay technique, with the top layer containing ball-milled cellulose. Single colonies that produced a surrounding clear zone were inoculated into liquid medium containing cellulose to confirm cellulolysis. 16 isolates showed complete degradation of the added cellulose at 55℃. Three isolates were identified by sequencing their 16S rRNA gene. Preliminary analysis of the retrieved sequences revealed novel species of Clostridiaceae and Acetivibrio spp. These isolates are being further characterized genetically, physiologically and biochemically. If they possess superior cellulolytic and/or fermentative feature(s), they could be very useful to harness biofuels from cellulosic biomass.