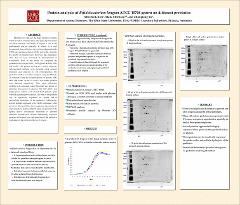 Bifidobacterium spp. are the major beneficial bacteria found in human intestinal tract. They play important roles in human nutrition and health. B. longum is one of the predominant species, especially in infants. It is well documented that prebiotics, such as fructooligosaccharide (FOS), galactooligosaccharide (GOS), and inulin, stimulate the growth of Bifidobacterium. However, this stimulatory effect has not been examined at transcriptional or translational level. In this study, we compared the proteomes of B. longum ATCC 15708 grown on FOS, GOS, and inulin, with glucose serving as a control substrate. Cell-associated proteins were prepared using sarcosyl treatment and analyzed by 2D electrophoresis. The proteomic profiles were then compared using the Phoretix 2D software. From the cultures grown on glucose, FOS, GOS, and inulin, 39, 46, 55, and 79 cell surface proteins were detected, respectively. Thus, more cell-surface proteins were expressed when this strain was grown on prebiotics than grown on glucose. The FOS-, GOS-, and inulin-grown cultures each shared 26-29 proteins spots with the glucose-grown cultures. The rest of the proteins may be specifically expressed for uptake and/or extracellular hydrolysis of the prebiotics. Additionally, several proteins appeared to be highly expressed when grown on these prebiotics than on glucose. Apparently, B. longum needs to express different genes or operons for the uptake and/or extracellular hydrolysis of different prebiotics. Identification of these differentially expressed proteins will expand our understanding of the molecular mechanism of the prebiotic effect on B. longum.