Denied and Disparaged: Madisonian Federalism and the Original Meaning of the Ninth Amendment 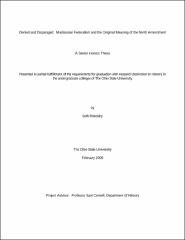