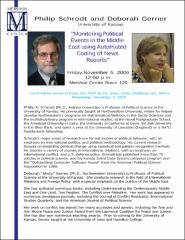 Philip A. Schrodt (Ph.D., Indiana University) is Professor of Political Science at the University of Kansas. He previously taught at Northwestern University, where he helped develop Northwestern’s programs on Mathematical Methods in the Social Sciences and the multidisciplinary program in international studies, at the Naval Postgraduate School, the American University in Cairo, the University of California at Davis, Bir Zeit University in the West Bank, and spent a year at the University of Lancaster (England) on a NATO Postdoctoral fellowship. Schrodt’s major areas of research are formal models of political behavior, with an emphasis on international politics, and political methodology. His current research focuses on predicting political change using statistical and pattern recognition methods. He teaches a variety of courses in international relations, with an emphasis on international conflict, and U.S. defense policy. Schrodt has published more than 75 articles in political science, and his Kansas Event Data System computer program won the “Outstanding Computer Software Award” from the American Political Science Association in 1995. Deborah “Misty” Gerner (Ph.D., Northwestern University) is Professor of Political Science at the University of Kansas. She conducts research in the field of International Relations and Foreign Policy, with a special emphasis on the politics of the Middle East. She has authored numerous books, including Understanding the Contemporary Middle East and One Land, Two Peoples: The Conflict over Palestine. Her work has appeared in numerous prestigious journals, including the Journal of Conflict Resolution, International Studies Quarterly, and the American Journal of Political Science. Her work on conflict has earned her many accolades and awards, including the Tom and Ann Moore Peace and Justice Award from the Lawrence Coalition for Peace and Justice. She has also won numerous teaching awards. Prior to coming to the University of Kansas, Gerner taught at the University of Iowa and Hamilton College.