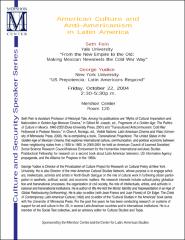 Seth Fein is Assistant Professor of Historyat Yale. Among his publications are “Myths of Cultural Imperialism and Nationalism in Golden Age Mexican Cinema,” in Gilbert M. Joseph, ed., Fragments of a Golden Age: The Politics of Culture in Mexico, 1940-2000 (Duke University Press, 2001) and “Transcultured Anticommunism: Cold War Hollywood in Postwar Mexico,” in Chon A. Noriega, ed., Visible Nations: Latin American Cinema and Video (University of Minnesota Press, 2000). He is completing a book, Transnational Projections: The United States in the Golden Age of Mexican Cinema, that explores international culture, communication, and political economy between these neighboring states from c.1930 to 1960. In 2000-2001 he held an American Council of Learned Societies/ Social Science Research Council/National Endowment for the Humanities International and Area Studies Postdoctoral Fellowship for research on a second book about Latin American television, US Information Agency propaganda, and the Alliance for Progress in the 1960s. George Yudice is Director of the Privatization of Culture Project for Research on Cultural Policy at New York University. He is also Director of the Inter-American Cultural Studies Network, whose purpose is to engage scholars, intellectuals, activists and artists in North-South dialogue on the role of cultural work in furthering citizen participation in aesthetic, political, social, and economic matters. His research interests include cultural policy globalization and transnational processes, the organization of civil society, the role of intellectuals, artists, and activists in national and transnational institutions. He is author of We Are Not the World: Identity and Representation in an Age of Global Restructuring (forthcoming). He is also co-editor (with Jean Franco and Juan Flores) of On Edge: The Crisis of Contemporary Latin American Culture (1992) and co-editor of the “Cultural Studies in the Americas” book series with the University of Minnesota Press. For the past five years he has been conducting research on systems of support for art and culture in the US, in several Latin American countries and in international institutions. He is a member of the Social Text collective, and an advisory editor for Cultural Studies and Topia.