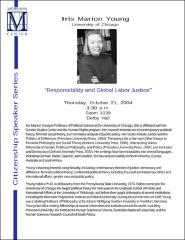 Iris Marion Young is Professor of Political Science at the University of Chicago. She is affiliated with the Gender Studies Center and the Human Rights program. Her research interests are in contemporary political theory, feminist social theory, and normative analysis of public policy. Her books include Justice and the Politics of Difference (Princeton University Press, 1990), Throwing Like a Girl and Other Essays in Feminist Philosophy and Social Theory (Indiana University Press, 1990), Intersecting Voices: Dilemmas of Gender, Political Philosophy, and Policy (Princeton University Press, 1997), and Inclusion and Democracy (Oxford University Press, 2000). Her writings have been translated into several languages, including German, Italian, Spanish, and Swedish. She has lectured widely in North America, Europe, Australia and South Africa. Young’s teaching interests range broadly, including contemporary theories of justice; democracy and difference; feminist political theory; continental political theory including Foucault and Habermas; ethics and international affairs; gender, race and public policy. Young holds a Ph.D. in philosophy from the Pennsylvania State University, 1974. Before coming to the University of Chicago she taught political theory for nine years in the Graduate School of Public and International Affairs at the University of Pittsburgh, and before then taught philosophy at several institutions, including the Worcester Polytechnic Institute and Miami University. During the summer term of 1995 Young was a Visiting Professor of Philosophy at the Johann Wolfgang Goethe University in Frankfurt, Germany. Young has held a visiting fellowships at several universities and institutes around the world, including Princeton University, the Institute for Human Sciences in Vienna, Australian National University, and the Human Sciences Research Council of South Africa.