Could Humphrey Have Gone to China? Measuring the Electoral Costs and Benefits of Making Peace 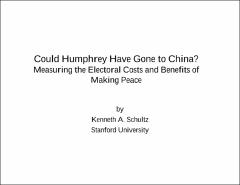 Theoretical arguments for why “it takes a Nixon to go to China” emphasize either the superior credibility that hawks have in advocating peace or the superior political benefits they enjoy in doing so. This paper looks for evidence of these effects in the canonical case: that of U.S. rapprochement with China in the early 1970s. I use counterfactual simulations on data from the 1968 National Election Study to explore the political effects of a proposal to open relations with China, focusing on whether and how those effects would depend on who made the proposal: Richard Nixon or Hubert Humphrey. I find evidence of both the credibility and electoral security effects hypothesized in the theoretical literature. In particular, there is a very dramatic asymmetry in the political costs and benefits of proposing peace: while such a proposal would have been electorally costly for Humphrey, it could have been an electoral boon for Nixon.