The Relevance of Context to Decision-Making Styles 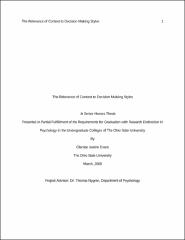 This study examined two different realms of regret, economic and relationship. Measures of regret were correlated in the two realms with self-efficacy, gender, and decision making styles (intuitive, analytical, regret-avoidant). Introductory psychology students took both the Decision-Making Styles Inventory (DMI) and a survey that was designed to induce regret in economical or relationship decision situations. Results indicated that males and females did not differ in their regret in relationship situations with the exception that females regretted more in a roommate disagreement scenario. Females were found to be higher in regret in two of the economic situations. Analytical decision making style was correlated with perceived regret in four of the situations (1 economic and 3 relationship) whereas self-efficacy was correlated with regret in the other four situations (3 relationship and 1 economic). This research calls for a new regret scale that takes into account gender and different realms of regret.