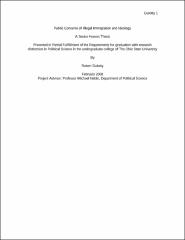 How does affective response to Hispanics relate to restrictionist border policy proposals? I argue a form of ideologically mediated pro- or anti-Hispanic affect better explains restrictionist sentiment than a variety of competing theories of immigration politics. Such alternative viewpoints include the realistic threat hypothesis, the “security dilemma” framework, “principled conservativism,” and finally, symbolic racism originating from the protestant ethic and unfiltered negative affect toward Hispanics. In contrast to these theories that take up structural features of economics, interethnic conflict, or disputes of ideology as the cause of insecurity, I argue that ideology acts as an enabling device that determines whether the negative affect will result in certain justifications for restrictionist immigration policy.