A Survey of the Coleoptera Associated with Carrion at Sites with Varying Disturbances in Cuyahoga County, Ohio 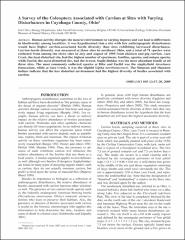 Human activity disrupts the natural environment to varying degrees and can lead to differences in biodiversity among localities. It was hypothesized that a site with low anthropogenic disturbances would have higher carrion-associated beetle diversity than sites exhibiting increased disturbance. Carrion beetle diversity was measured at three sites in northeast Ohio, and a total of 71 species were collected from among the three sites in July and August of 1995 from chicken and pig carrion. Luce Creek, the least disturbed site, had the highest number of specimens, families, species, and unique species while Euclid, the most disturbed site, had the lowest. Staphylinidae was the most abundant family at all three sites. The most commonly collected species at Dike and Euclid was the staphylinid Aleochara bimaculata, while at Luce Creek, it was the silphid Silpha noveboracensis. The Simpson and Shannon indices indicate that the less disturbed environment had the highest diversity of beetles associated with carrion.