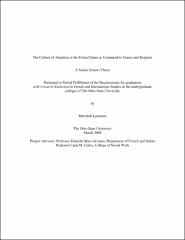 This thesis is a study of how adoption functions as an institution and is perceived publicly in three countries. Interest in the adoption system in the United States was one major factor that motivated this research thesis. There are an estimated 500,000 children in the out of home care system in the United States and a significant number of these children are legally free for adoption. Yet most of these children are not adopted in any given year. Additionally, Americans adopt a high number of children internationally despite an adequate amount of American children available for adoption. The motivation to adopt has been altered by changing family demographics. Gay and lesbian couples, single parents, and older couples are more likely to adopt. These aspects of adoption inspired my interest in how other countries view adoption and whether they experience similar problems. A second major factor which influenced this research is my interest in international relations and diplomacy and French. Comparing the culture of adoption in the United States to the culture of adoption in France and Belgium has been of interest to me for a number of years. The culture of transparency in government and privacy in the home has a major effect on attitudes towards adoption in France and Belgium. I anticipated adoption would be widely discussed, encouraged, and treated as a government institution in those countries. Instead adoption is perceived as an incredibly private matter in France and Belgium, and there is a more widely accepted culture of adoption in the United States when compared to those countries.