Ecological Effects of the Installation of an Underground Oil Pipeline on Millipede Communities in Hocking County, Ohio 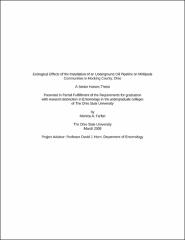 The expectation of a higher number of disturbance hardy millipedes (orders Julida and Spirostreptida) in a warmer, drier disturbed area vs. a forested area is supported by previous research. This was studied in a maturing (~ 75 years old) mixed hardwood forest in Hocking County, Ohio. In 2003 the forest was disturbed by placement of an underground oil pipeline resulting in the removal of all trees within 15 m of the pipeline. The temperature in the corridor is highly variable and the subsoil is now present on the soil surface. In May 2006, twenty pitfall traps were set along a north-facing hill, half in the pipeline allowance and half in the adjacent forest. In 2006, Cambala annulata and members of order Julida were found in significantly higher numbers (p<0.05) in the forested habitat. Abacion lactarium (n=10) was found only in the pipeline corridor. In 2007 a second study was conducted using modifications to the 2006 trap placement. Fauna from litter samples were extracted using Berlese funnels. In 2007, Nannaria ohionis and Ptoyiulus impressus were present in significantly higher numbers in the woods. Cylindroiulus sp. B, Ophyiulus pilosus, and Oxidus gracilis were found in significantly higher numbers in the pipeline corridor. Soil chemistry and litter quantity were analyzed in each habitat in 2007. Litter amounts and carbon levels were higher (p<0.05) on the forest floor than in the pipeline corridor. These results are noteworthy in light of growing forest and soil disturbance caused by increased economic development in the region.

The College of Biological Sciences, The Ohio State University